Competitiveness must be a priority for UK Automotive

With one year to go until the UK leaves the EU, the Society of Motor Manufacturers and Traders (SMMT) today set out its priorities to assure the UK automotive industry’s future success. The move follows agreement of a Brexit transition period, designed to allow business to continue as usual while a new UK-EU trading relationship is negotiated. While the deal provides some welcome breathing space, the industry now seeks rapid progress on key automotive concerns to avoid another cliff edge on 31 December 2020.

With decisions on new vehicle models in the UK due in the next 12 months, it is essential that both industry and government do all they can to secure this investment and safeguard the thousands of jobs that accompany such decisions.

New figures from the Production Outlook, an independent forecasting report released today, predict there will be modest fall in UK vehicle production to 1.729 million in 2018 and 1.713 million in 2019. If we assume positive production decisions are made for the UK on a number of future models, production could climb to over 1.8 million by 2023.1

Our continued ability to trade freely with our biggest partner, the EU, and key global markets is essential but UK competitiveness starts with local conditions. Business rates, capital allowances and energy costs, for instance, must all be globally competitive; training and skills for a productive workforce must focus on new technologies and the UK supply chain must be attractive to investment.

All of this will be vital if the UK is to remain a global destination for future investment in new technologies, including digital manufacturing, lightweight materials, vehicle electrification and connected and self-driving vehicles. The Government’s Industrial Strategy, published last year, and the accompanying Automotive Sector Deal recognise this, but cross-Government policies must align to deliver on the ambition.

UK Automotive’s rich heritage in engineering and manufacturing makes it an important part of the UK’s diverse economy, with the high value goods it produces creating skilled jobs and driving exports. The sector is already one of the UK’s most important economic pillars, delivering an annual £22.8 billion direct to the Treasury, employing 169,000 people and responsible for 13% of all the UK’s export in goods. However, new figures published today show that the true scale of the sector’s economic contribution is significantly larger, at around £219 billion.2

A new SMMT study of economic figures highlights the industry’s impact on adjacent sectors. From raw materials and R&D, to logistics, freight and shipping; from retail and distribution, finance, insurance, fuel and maintenance, to telecoms, electronics, IT and tech; and not forgetting motorsport, travel, advertising and media, sciences and education, the list of sectors which depend, at least, in part on the success of the automotive industry is extensive. 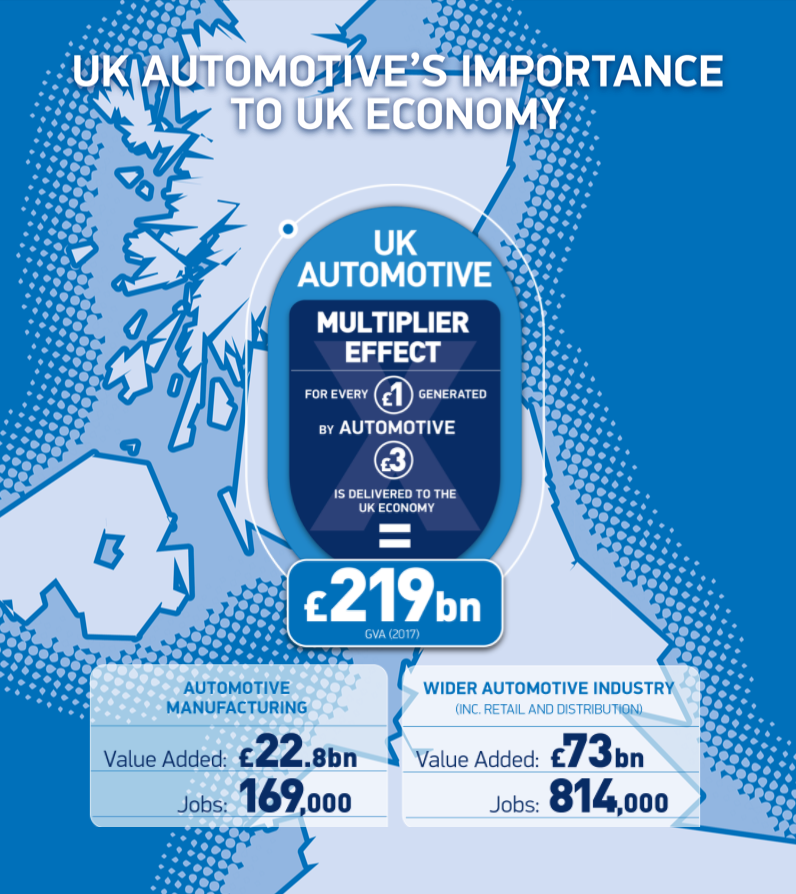 Some 200,000 people are employed in new car retail alone, while UK-based car finance firms employ over 45,000 more, with an annual £12.5 billion economic contribution. On the road, the vehicle fuel industry supports 40,000 jobs,3 and a further 347,000 are employed in vehicle servicing and repair.4

Meanwhile, the UK’s globally renowned expert engineering base means eight of the world’s 11 Formula One teams make their homes here – together employing a further 41,000 people, 25,000 of them engineers.5

“Last week’s deal on the transition period was essential, providing a short term boost and a degree of certainty for investors. The next major hurdle will be securing a new, comprehensive trade agreement with the EU and our partners across the world. In the meantime, government must help make the UK as competitive as possible.

Government’s Industrial Strategy and Automotive Sector Deal are positive steps but we need concrete action if we are to stay ahead in what is an intensely competitive global environment. New figures out today show the positive impact our industry has on other sectors so it is vital that automotive competitiveness is front of mind for policy makers.”

Remaining part of the single market and customs union, continued access to EU talent, and the ability to benefit from preferential EU trade agreements with third countries remain the UK Automotive industry’s priorities in the future EU-UK relationship. Equally important, however, is the need for the UK to maintain influence within EU regulations, both during transition and after Brexit, as critical decisions are taken on shared issues such as CO2 and data – issues which will ultimately affect UK consumers, exporters and other businesses.

1. The Production Outlook is an independent forecast of UK vehicle manufacturing commissioned from AutoAnalysis. It is updated up to four times a year to respond to market and production cycle fluctuations. The latest report was produced in March 2018.

The report’s key findings are:

The Production Outlook report includes speculation on the potential outcome for UK car production based on two key assumptions:
A. The UK will reach an agreement with the European Union, which will include a transition period of just under two years, to December 2020. Until then, the automotive industry will operate just as it does now, although in legal terms it will leave the Single Market and the Customs Union at some point.
B. A zero-tariff agreement is reached with the EU for the trading environment after December 2020.

If you have any questions about NMCL, becoming a pilot organisation or an assessor please email us by completing the following form.